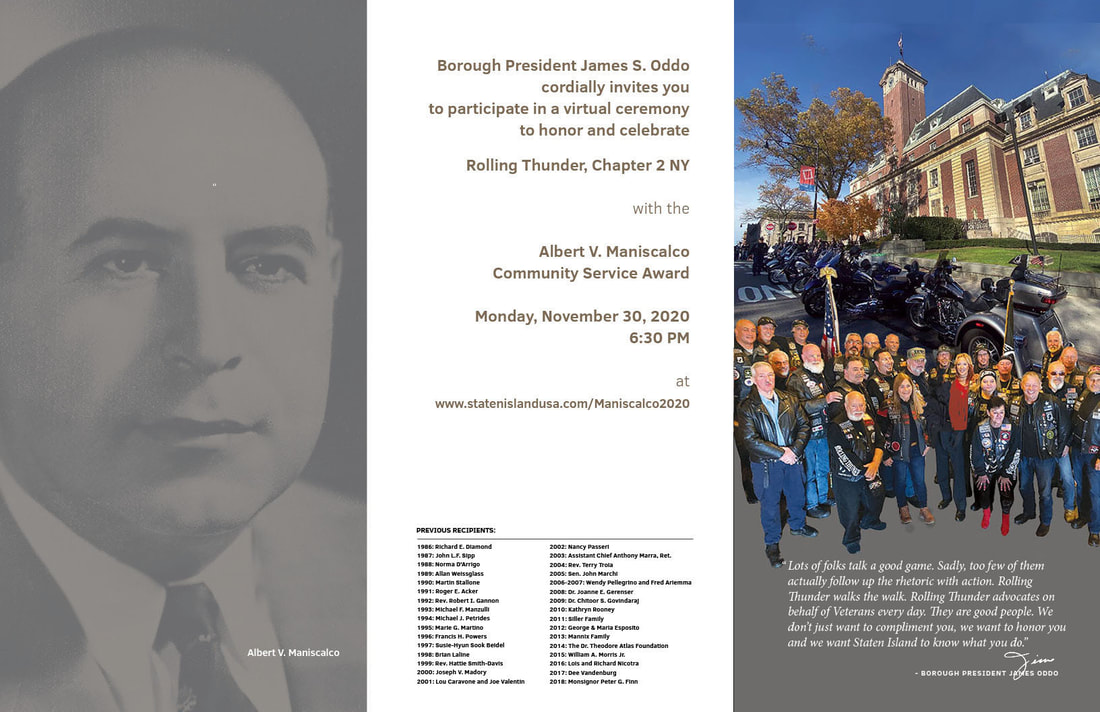 The Albert V. Maniscalco Community Service Award was established in 1986 in honor of the ninth borough president. Maniscalco's tenure from 1955 to 1965 saw the creation of the Greenbelt and the construction of the Verrazano-Narrows Bridge. The award celebrates the civic-mindedness and tireless energy of individuals or organizations that work to help community members in need and to make Staten Island a better place.

“Lots of folks talk a good game. Sadly, too few of them actually follow up the rhetoric with action. Rolling Thunder walks the walk. Rolling Thunder advocates on behalf of Veterans every day. They are good people. We don’t want to compliment you, we want to honor you and we want Staten Island to know what you do,” said Borough President Oddo.

Incorporated in 1995, Rolling Thunder, Inc. is a class 501(c)(4) non-profit organization with over 90 chartered chapters throughout the United States and members abroad. While many members of Rolling Thunder are veterans and many ride motorcycles, neither qualification is a prerequisite. Rolling Thunder members are old and young, men and women, veterans and non-veterans. All are united in the cause to bring full accountability for Prisoners Of War (POW) and Missing In Action (MIA) of all wars, reminding the government, the media and the public by their watchwords: “We Will Not Forget.”

Rolling Thunder, Inc.'s major function is to publicize the POW-MIA issue by educating the public of the fact that many American Prisoners Of War were left behind after all past wars. They are dedicated to helping correct the past and to protect the future Veterans from being left behind should they become Prisoners Of War/Missing In Action. The group is committed to helping American Veterans from all wars.

On Monday, November 4, 2019, Borough President Oddo joined with Rolling Thunder and Congressman Max Rose to unveil a POW/MIA Chair of Honor at Staten Island Borough Hall. The chair, provided by Rolling Thunder, will remain perpetually empty to symbolize there will always be a place at its location awaiting the POW/MIA soldiers’ return.

“We are tremendously grateful to the Borough President to be recognized with this award. We want to thank our community because we couldn’t be successful without the community and Veterans,” said Vinny Perno, President, Rolling Thunder Chapter 2 New York.

PAST WINNERS OF THE MANISCALCO AWARD: