ACCORDING TO JIM / A FERRY TALE 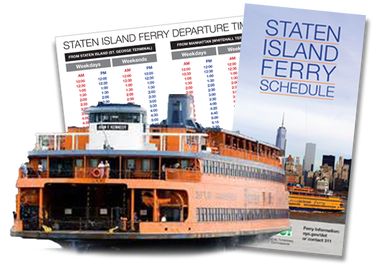 At that time, the ferry schedule created a de facto curfew for Staten Islanders, due to hour-long waits during overnight hours, and after 7:00 pm on Saturdays and Sundays.  Who among us has not suffered the misfortune of running to beat the closing doors, with full knowledge that should we miss the boat, we’d  be relegated to cooling our heels on hard benches, in a dingy terminal, for a solid hour before another arrived.
At the meeting with the ferry riders I immediately agreed to introduce legislation mandating the elimination of hour-long waits.  At a minimum, we all agreed, there should never be more than a thirty minute wait for the ferry.

In late June 2013, the City Council’s Transportation Committee held a hearing on my bill. Unfortunately, then Commissioner Sadik-Khan did not attend to testify, but sent a staff member instead who testified in opposition.

In February 2014, soon after his swearing in, Mayor de Blasio announced the funding of Phase 1, and on May 3-4 expanded service began. 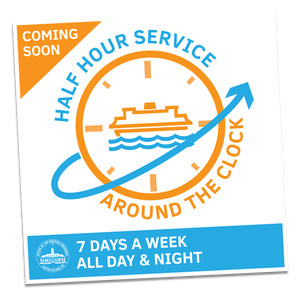 On May 10,
I hosted a celebratory ride on the ferry to commemorate
​the implementation of Phase 1.

What have been the effects of increased ferry service

It involved good policy, good timing, good people, and the ability to know how to get things done. I love it when a plan comes together – but like the best laid plans of mice and men, something always comes up that must be addressed.

The time to address these concerns is not next week, next month or next year; the time is now.  We’re already begun these conversations, in fact, we persuaded the DOT to do a study exploring ferry landings other than Whitehall.  But that is just the start, and there are still more chapters to be written before this story is concluded.

And we intend to write them.